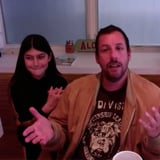 Adam Sandler's 11-year-old daughter, Sunny, doesn't hold back! In a hilarious interview for Jimmy Kimmel Live, Adam shared a story about how Sunny delicately pointed out that he had hair growing out of his ears. Um, yikes! Fortunately, Sunny was there to save her dad from embarrassment.

"I wanted to tell you a quick thing about my Sunny," he told Jimmy. "So, I had a hair coming out of my ear, apparently, and Sunny told me about it. And she said I looked goofy, so I went and shaved it."

Seems like a pretty easy task to handle, right? Apparently, it didn't exactly go well for the 53-year-old father of two. "I took the razor I usually shave with, and I went like this," said Adam, motioning to the side of his face. "And then I came downstairs and said, 'How's that, Sunny?' and she said, 'You're bleeding.'"

Upon even further inspection, Sunny didn't approve of her dad's handiwork, so Adam had her explain his new injury to Jimmy. "So, it's like, it's bloody and then there's a big . . ." she said, before Adam finished her sentence with: "There's a gut! She says there's apparently a 'gut' coming off my ear!" Ouch! Adam went as far as to use a paper towel to show the blood that was still coming off the wound, and yep, it definitely looks painful.

Related:
LOL, This Mom’s Comics About Raising Teens Will Make You Feel Less Crazy About Your Own Kids

Leave it to your tween to point out all of your bodily flaws! Play the clip above to see Sunny's cameo, and continue the interview to hear Adam explain how little he's involved with homeschooling and how he recently got caught doing push-ups in the middle of the street.