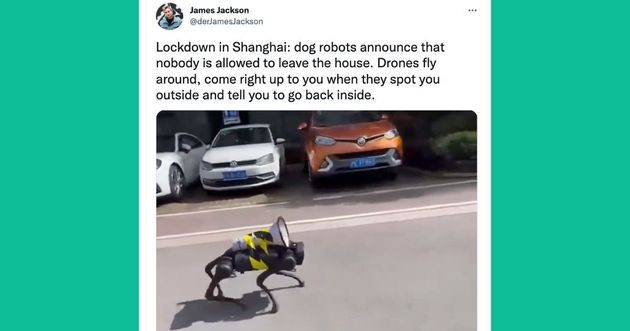 Videos of robotic dogs in Shanghai have been widely shared online

Videos of drone and robotic dogs appearing to discourage Shanghai residents from leaving their homes during the current lockdown have appeared online, showing the future really is here.

The Chinese city, which has 26 million residents, is currently in a two-stage lockdown following a spike in Omicron cases. This means half of the residents are encouraged to stay indoors on alternating days as people undergo mass testing.

The lockdown followed an outbreak of 30,000 cases in March in Shanghai – China is following a zero-Covid strategy, and so wants to completely halt the virus in its tracks.

As part of this strict policy, it appears the Chinese authorities have enlisted the latest tech to control the Shanghai citizens.

One particularly dystopian video emerged on Twitter on Wednesday which appeared to show a drone telling residents to stop singing at night.

Senior China correspondent for The Economist, Alice Su, shared the clip from Weibo (a Chinese blogging website) with the caption: “Shanghai residents go to their balconies to sing and protest lack of supplies.

“A drone appears: ’Please comply with Covid restrictions. Control your soul’s desire for freedom. Do not open the window or sing.’”

As seen on Weibo: Shanghai residents go to their balconies to sing & protest lack of supplies. A drone appears: “Please comply w covid restrictions. Control your soul’s desire for freedom. Do not open the window or sing.” https://t.co/0ZTc8fznaVpic.twitter.com/pAnEGOlBIh

Other videos have suggested a similar thing – that Shanghai is using drones to order its residents to follow lockdown.

China’s state-run newspaper The Paper also shared a video of a robotic dog with a loudspeaker attached recently which announces: “Wear the mask, wash your hands frequently, check your temperature.”

Other people shared their similar experiences of encountering such robots on Twitter.

Lockdown in Shanghai: dog robots announce that nobody is allowed to leave the house. Drones fly around, come right up to you when they spot you outside and tell you to go back inside.pic.twitter.com/TM7Te6xgwW

Xinmin Evening News, a Shanghai paper, even reported that China has used drones to disinfect some public areas after Covid cases were reported in various places, and have been used to spot anyone who breaches lockdown.