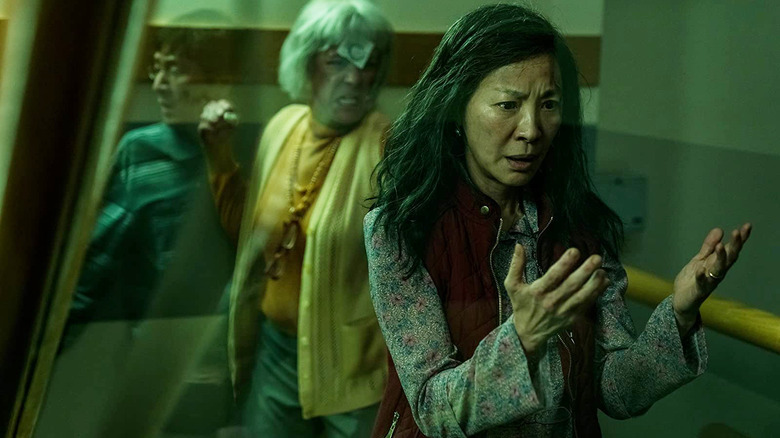 If you've been on a social media app or visited a movie and TV news site lately (you know, like the one you're reading right now), then you've no doubt noticed film enthusiasts of the world carrying on about "Everything Everywhere All at Once." The much-buzzed-about movie comes from writer-directors Daniel Kwan and Daniel Scheinert (aka Daniels), the duo behind the surreal 2016 dramedy "Swiss Army Man" (aka the film where Daniel Radcliffe plays a farting, multi-purpose corpse) and helmers of the awe-inspiringly wild music video for "Turn Down for What," among other things. "Everything Everywhere" also had what we at /Film declared the best trailer of 2021 and has been earning raves from critics since its premiere at the 2022 South by Southwest (SXSW) film festival. /Film's own Jacob Hall gave it a coveted 10 out of 10 rating, calling it "the best American movie in years" in his review.

Should you (somehow) need more convincing to check it out, then fear not! A new clip has dropped for "Everything Everywhere" ahead of its theatrical debut in the U.S., and it's a doozy, even without any context. The short video shows Michelle Yeoh getting into a brief but bruising martial arts fight on a stairwell with Jamie Lee Curtis, all while a grown-up Ke Huy Quan (as in Short Round from "Indiana Jones and the Temple of Doom" and Data from "The Goonies") watches on in astonishment. What else is there to say?

Watch The Everything Everywhere All At Once Clip

Yeoh stars in "Everything Everywhere All at Once" as Evelyn Wang, an aging Chinese-American woman who gets swept up into a mind-melting adventure where it falls to her to save the world by tapping into her alternate lives from other universes. As chance would have it, the Daniels were approached to direct season 1 of Marvel's "Loki" series while they were working on the movie but passed in order to craft their own multiverse-spanning romp. During /Film's interview with the duo, Scheinert noted that he and Kwan suspect "Everything Everywhere" is the closest they'll ever come to making a Marvel-style blockbuster, too:

"I think in some ways, people asked us when we made 'Swiss Army Man,' 'Oooh, you're going to do your big leap into Hollywood.' And it made our brains think, 'What would our movie be, if we were going to do a big Hollywood movie?' And then this is what we wrote."

Joining Yeoh, Curtis, and Quan in the "Everything Everywhere" cast are names like legendary character and voice actor James Hong (most recently heard in "Turning Red"), Jenny Slate ("Big Mouth"), and Harry Shum Jr., who appeared opposite Yeoh in the wuxia film sequel "Crouching Tiger, Hidden Dragon: Sword of Destiny" and made a cameo in the mid-credits scene for "Crazy Rich Asians" (which Yeoh also starred in). The short of it: There's a whole lot to like about "Everything Everywhere" on paper, and it seems like the conversation around the movie has only just begun, so best that all you fellow film-lovers out there start making plans to see this one as soon as possible.

"Everything Everywhere All at Once" begins playing in select U.S. theaters on March 25, 2022.

The post Everything Everywhere All At Once Clip: Possibly the Best Movie of 2022 Arrives Tomorrow appeared first on /Film.