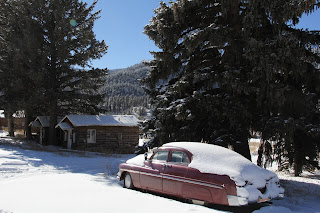 Patty Hearst Not At Crystola

Undersheriff Robert Allen said a Colorado State Patrol radio dispatcher in Colorado Springs received a call after 1 a.m. from a man identifying himself only as "Chuck."The caller said he was "heavily armed" and he had Miss Hearst "cornered" inside a cabin at Crystola near the Teller-El Paso county line.

The patrol dispatcher relayed the information to the Sheriff's Substation office in Woodland Park. Deputy Royce Dean, with assistance from the Woodland Park Police Department, then went to Crystola to investigate the report.

Dean was able to determine the armed and inebriated caller had mistaken a motel tenant, who somewhat resembled descriptions and photographs of the missing heiress , had been living at the Crystola cabin since early April.

Certain things "capture" you, over time and distance

For most of my life, certain news stories have seamed to reach out, grab me by the collar, and shake me for attention. Not surprising, I guess — as I spent an inordinate amount of time in the business. But it seems weird how certain things "capture" you, over time and distance. Steve Plutt, from the Pikes Peak area, sent me the preceding clip recently, when he noticed a blog story I wrote about — among other things— the unfolding saga of kidnap victim turned bank robber Patty Hearst and Sybionese Liberation Army. The story tied all the way back to my childhood. And this was not the first time Steve was able to pluck seemingly unrelated snippets that turned "profound," when slipped into my own little history.

Waiting for the paper was a pretty regular thing for the folks on my paper route through that summer of 1974, as President Nixon faced possible impeachment and eventually resigned in early August. Among other events, there was the Dixie County sighting of a Florida Skunk Ape in July that year. It really wasn’t what you would call a slow news period.
But the Patty Hearst story was compelling.
“Death to the fascist insect that preys upon the life of the people,” was the slogan of the SLA and a seven-headed cobra snake its symbol. The members of the army were known on occasion to use cyanide-laced bullets.

Patty Hearst’s conversion from the straight-laced heiress of the Hearst newspaper fortune to a bank-robbing “fundraiser” renamed Tania, sporting automatic weapons at various robberies and car jackings with the terrorist group was a hot topic. In May, Patty (a.ka. Tania) fired a series of warning shots at a storeowner that was trying to detain SLA members, Bill And Emily Harris, when they were caught shoplifting in sporting goods store in Los Angles.
The next day, in a two-hour gun battle between the SLA and 500 Los Angeles police officers, where nine thousand rounds were fired, and six SLA “soldiers” were killed, the SLA sealed their international notoriety. Hearst was eventually arrested in 1975 and brought to trial in a sensational legal event, in which she was defended by superstar lawyer F. Lee Bailey.
Nesting in the weirdness of Steve's pass-along of the clip, was the relationship to big news happenings that  over time, pushed around my life.  For years, on two separate stints, I was publisher of the Courier, and the account resurfaced crazy stories I had encountered at that operation with tangents and fragments my own history there.
It had a familiar ring, as it had been more than 20 years since members of “The Texas Seven,” a group of prisoners who escaped from the John B. Connally Unit near Kenedy, Texas, on Dec. 13, 2000, and later killed Irving police officer Aubrey Hawkins on Dec. 19, 2000, were arrested about a month later on a cold January Monday, right in Woodland Park.
While I was considering that,  massive wild fires began destroying large portions of the Colorado cities of Superior and Louisville in Boulder County. I was reminded of coverage of three successive "largest and most destructive fires in Colorado" I had covered, while at the Courier. First the Hayman, then the Waldo Canyon, and then on to the Black Forest Fire. The trauma witnessed of all three was still a part me.
I also had reservations in Boulder, for New Year's Eve.
Talking with survivors of Hayman and Waldo Canyon, and the Black Forest Fire, hearing about their experiences still brings back images in my mind of that weird pink, smoky glow on ridges above Woodland Park, and separately Manitou Springs. And then to the east of my onetime home in Gleneagle.
And now, the fires of hell burning over the ridges just south of here, in Boulder County.