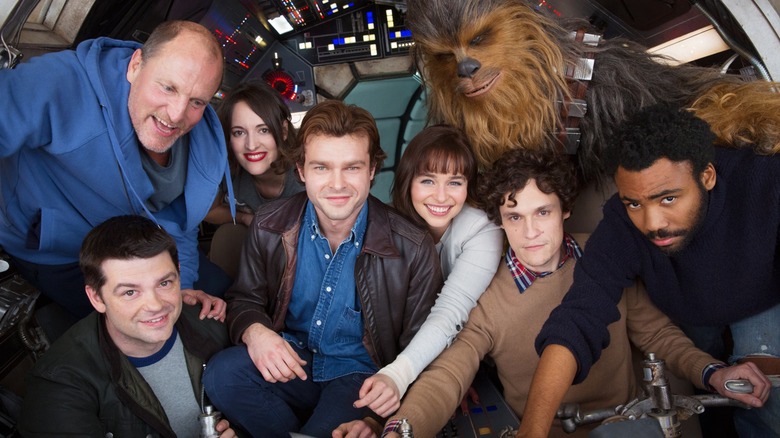 If you ever happen to have a script on your hands that sounds like an absolutely terrible idea on paper, simply bring in the directing duo of Phil Lord and Chris Miller and they'll somehow manage to spin straw into gold. The pair have essentially made a career out of performing this little magic trick. They transformed a 1987 television drama series into the high-wire, laugh-a-minute comedy classic "21 Jump Street" and its equally as beloved sequel. In 2014, they set their sights on "The LEGO Movie," which easily could've become an obnoxious exercise in IP crossovers and instead revealed itself to be a hilarious, heartwarming, and cleverly constructed parody of everything we initially feared from such a premise. With this body of work under their belts, the overall response to the announcement that they would next tackle a Han Solo origin movie -- considered by many to be an utterly unappealing and unnecessary project in the first place -- instead resembled cautious optimism, with many looking forward to just how they would shake up the "Star Wars" franchise forever with their usual irreverent wit.

Needless to say, those plans didn't pan out very well in the end. Citing that old chestnut about "creative differences," Lucasfilm and Lord and Miller finally decided to take drastic measures, putting out a statement announcing their parting of ways from "Solo: A Star Wars Story," despite having already filmed months' worth of footage. After enlisting reliable hired gun Ron Howard to bring the production across the finish line and on time, the underwhelming final result more or less spoke for itself. A straightforward Han Solo spin-off movie proved to be as bad an idea as many onlookers initially assumed, leaving us to wonder how Lord and Miller's apparently radical take on the material would've turned out instead.

Lord and Miller understandably haven't spoken much about their experiences on the film in the years since, but maybe it really is true that time heals all wounds. The two are finally addressing their brief foray into the space opera franchise and, remarkably, seem to have made their peace with everything that transpired. Read on to check out their full comments.

"It Made Us Better Filmmakers In The Long Run" 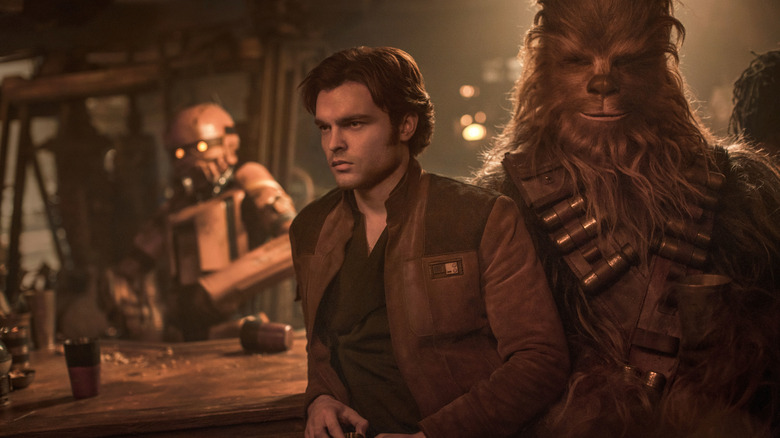 Almost five years removed from "Solo: A Star Wars Story," both the directors and the franchise itself have moved on while hardly missing a beat. While "Solo" largely crashed and burned at the box office (those extensive reshoots did no favors to the already bloated budget), the franchise continues to remain popular and successful -- and there are even plans for a "Solo" spin-off series focused on Donald Glover's Lando Calrissian. Phil Lord and Chris Miller, meanwhile, have merely involved themselves with "Spider-Man: Into the Spider-Verse," the excellent new AppleTV+ series "The Afterparty," "The Mitchells vs the Machines," "America: The Motion Picture," and much more.

But maybe a little reminiscing about the past would be good for the soul, too. Josh Horowitz, host of the "Happy/Sad/Confused" podcast, managed to talk all about it with both Lord and Miller in a clip posted to Twitter. First, Lord addressed what they found appealing in the character of Han Solo:

"We've always wanted to make projects that are, like Han, a maverick. And so that's what we were always trying to do, that's what we were hoping to do with those movies. What's funny about 'Star Wars' is it's an independent film made outside the Hollywood system. And Han is the spirit of that kind of independence and that's why we were always inspired to work on that with everybody."

Do I detect the slightest amount of shade thrown at the current state of the franchise, by pointedly juxtaposing the grassroots origins of the original "Star Wars" with their far different experience on "Solo?" I might be reading into it, admittedly, especially given Lord's next comment.

"And the good news is, they can't take away what you learned. We learned so much. We got to work with the greatest people, we made so many friends. We put what, in animation, we call 'pencil miles' under our belts and it made us better filmmakers in the long run. So, in a funny way, there were some negative emotions associated with that, but the way I feel about it now, like I feel about all these projects, which is you're just trying to become better and learn and collaborate with people and that doesn't go away."

I'll always feel a little bitter about their removal from "Solo," but at least they don't seem to be!

Read this next: Star Wars Movie Villains Ranked Least To Most Powerful