An underrated joy of modern life is that you don’t have to watch live TV to see all of the uncomfortable situations people find themselves in on live TV. I don’t even own a television, nor would I ever watch NBC Sports coverage of a NASCAR race, yet I still got the chance to see the October 2 clip of the reporter Kelli Stavast attempting to interview the race-car driver Brandon Brown after an unexpected victory while the crowd behind them chanted “Fuck Joe Biden.” “And you can hear the chants from the crowd,” Stavast narrated for the camera, before repeating what she seemed to think she was hearing: “Let’s go, Brandon.” As I would say after texting this link to someone in the middle of the workday: “LOL!”

Then it became a hashtag and a whole thing, which you may have heard about. People who don’t like Joe Biden picked up “Let’s go, Brandon” and immediately ran the joke into the ground. People who do like Joe Biden started fighting it on social media, as if the phrase were the latest and greatest threat to democracy, and social media were the the place where great threats to democracy should be fought. This is political discourse in the Twitter era: A hashtag becomes annoying to a group of people, so they try to repurpose it, or replace it with an artificially juiced hashtag of their own. If you happen to have seen a liberal on your timeline in the past few weeks tweeting #ThankYouBrandon to a president they are purporting to like and support, this is why. But as for all of it together, the bigger question is still unanswered: Why?

Republican politicians embraced “Let’s go, Brandon” with verve, probably because it recalled the unhinged, grassroots meme energy that defined the Trump presidency. Representative Jeff Duncan of South Carolina found a Let’s Go Brandon face mask to wear; Senator Ted Cruz of Texas did a couple of confusing tweets signaling his enjoyment of the phrase; Representative Bill Posey of Florida was the first to say it during a speech on the floor of Congress. Lauren Boebert, the representative from Colorado who is better known for having once endorsed the QAnon conspiracy theory, had Let’s Go Brandon added to the back of a dress she wore to a party at Donald Trump’s Mar-a-Lago resort in early November, imitating Alexandria Ocasio-Cortez’s Tax the Rich Met Gala gown.

This is the beginning of a massive and unstoppable RED wave. We are coming to take back our rights, our freedom, Congress and the White House next. #letsgobrandon

Meanwhile, the attention economy provides other incentives. TikTok and Twitter users uploaded clips of groups chanting “Let’s go, Brandon” at various sporting events; someone hacked two random road signs in Northern Virginia to display the phrase; a handful of people incorporated it into their Halloween costume, and at least one guy put it on his truck. More than one TikTok user rearranged big, decorative letters at Hobby Lobby to spell out “Let’s go, Brandon,” in pursuit of going a little viral. When Bryson Gray, a rapper who has been profiled by The New Yorker for being both a Trump supporter and a rapper, released a “Let’s Go Brandon” song, it displaced Adele from the top of the iTunes sales chart. Predictably, the Trump campaign started selling Let’s Go Brandon T-shirts too.

If this all sounds sort of juvenile to you: Yes. Which might be why liberals—scarred from the 2016 election, when they learned that juvenile memes and online pranks could be cause for concern—reacted as if “Let’s go, Brandon” were code for something more sinister than a pretty boring insult, and then chose to respond to Brandon (in a juvenile way) with more Brandon. In early November, MeidasTouch, an anti-Trump political action committee specializing in social media, started encouraging its followers to subvert the original #LetsGoBrandon hashtag by posting sincere thank-you notes to the president and tagging them #ThankYouBrandon. “Lol we always ruin their moronic and childish slogans,” the well-known #Resistance figure Scott Dworkin joked with his 1 million followers. This worked to the extent that #ThankYouBrandon became a trending hashtag in the U.S., though it also prompted a victory lap for the #LetsGoBrandon crowd, which had been presented with yet another opportunity to point out that the left is “cringe” and “can’t meme.” Soon, MeidasTouch was selling #ThankYouBrandon T-shirts, hoodies, and coffee mugs.

In other words, Democrats are reclaiming … the name Brandon from Republicans. But to what end? In spirit, Brandon vs. Brandon recalls the manic energy of the 2016 election cycle, when Trump voters reclaimed the insult deplorables as a badge of honor and then Hillary Clinton voters eagerly took up nasty woman, in a showdown of symmetrical, unbearable smugness. But today’s hashtag tug-of-war has a little more in common with last summer’s push by K-Pop fans to flood the #WhiteLivesMatter hashtag—itself a backlash to the original #BlackLivesMatter movement—with irrelevant content and videos of K-Pop stars. Those efforts were of dubious utility, and the K-Pop fans were criticized afterward for having turned #WhiteLivesMatter into a trending topic on Twitter and thereby expanding its reach.

Leticia Bode, a communication researcher at Georgetown University, has studied a related behavior, which she and her colleagues labeled “hashjacking.” For a paper published in 2014, they looked at how Tea Party conservatives deployed liberal hashtags like #p2—for “Progressives 2.0”—during the 2010 midterms in the hopes of “encroaching on opposition’s keywords to inject contrary perspectives into a discourse stream.” (Others have since observed the right-wing hijacking of the popular hashtags #MeToo and #ShoutYourAbortion.) Yet even Bode has no idea whether these sorts of online pranks have any real effects. “We don’t have good data on whether it works,” she told me.

The clearest precedent for “Thank you, Brandon” began in 2009 with “Thanks, Obama,” the catchphrase uttered most often by Tea Party personalities and boys I went to high school with. That phrase originated on Twitter in its earliest days of political relevance, and was affixed to snide tweets about Barack Obama’s failures, both real and fabricated. By 2012, liberals had flipped around its meaning, such that “Thanks, Obama,” when attached to some trivial or mundane grievance, could be repurposed as a satire of conservative petulance. But “Thanks, Obama” would eventually become bipartisan, used online as an absurd, sarcastic rejoinder to pretty much anything. By 2015, “Thanks, Obama” had grown so old and toothless that Obama himself could riff on it in a BuzzFeed video—and it didn’t even make him seem like an oversensitive loser. (Though it is pretty corny to watch now. It’s very of its time.)

Already, of course, #ThankYouBrandon is being co-opted by sarcastic Republicans as a sequel to “Thanks, Obama.” (Walked right into that one!) If Democrats relaxed a little bit, they could turn this around. They could just do what they did last time—repeat the words of the original meme until they become mush. But if I were to predict an outcome here, it’s that “Thank you, Brandon”—which makes absolutely no sense—will soon disappear, while “Let’s go, Brandon”—which is at least subversive and fun (to a point) will stick around. “For any slogan to take off, it really needs to mean something for people,” says the sociologist Jen Schradie, who wrote a 2019 book on digital activism, The Revolution That Wasn’t.

“Let’s go, Brandon” does mean something to the people who are chanting it: It means “Fuck Joe Biden,” which resonates with anybody who strongly dislikes the president, and it also means “Nobody can prove that I am saying ‘Fuck Joe Biden,’” which satisfies the human urge to stick out your tongue. “Thank you, Brandon” lacks the same power because, uh, Brandon is not the president’s name, and if I liked the president a lot I wouldn’t want to call him some random name that isn’t his name. 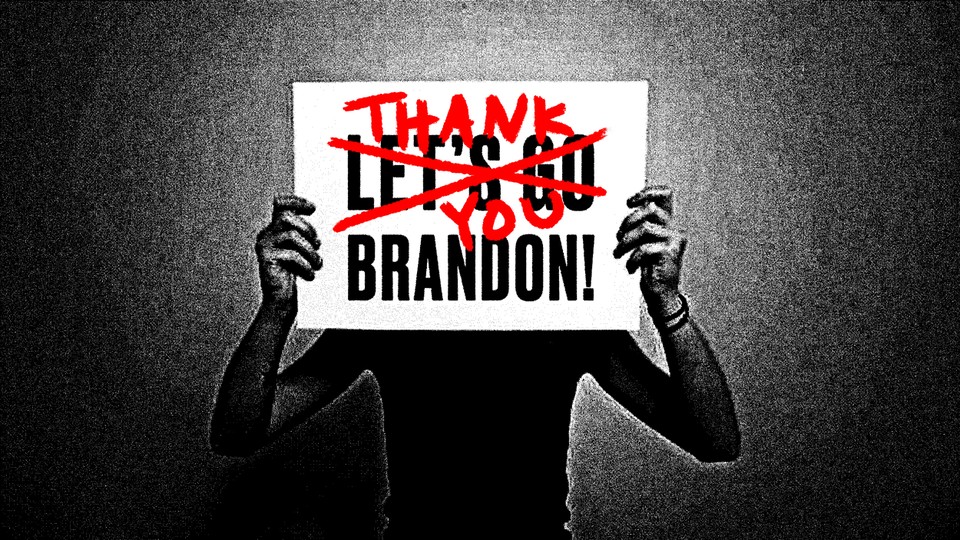