You can't remember everything. That's why taking notes is crucial, but it's not enough to just take notes: they need to be organized and easy to pull up later. That's where note-taking apps come in.

There are plenty of great note-taking apps, but not all of them run well on a Mac. Productivity applications that don't fit your workflow can trip you up, which is why finding an actual macOS app matters. Keyboard shortcuts, notifications, and user interfaces that don't fit in can be distracting, which is the last thing you want to be thinking about when it's time to take notes.

I've been writing about macOS for over a decade, and I'm passionate about finding the best Mac apps. I considered 20 Mac note-taking apps, and after extensive testing, this article includes the best of the best.

The 5 best note-taking apps for Mac

What makes a great note-taking app for Mac?

You can take notes using just about any app, or a piece of paper for that matter. For the purposes of this article, though, we only considered apps built with note-taking in mind. Typically this means a primary window you can use to browse all of your notes, sorted into notebooks and usually arranged by dates.

All of the apps below meet all of these criteria—and excel at many of them. One of them is right for you.

See our favorite ways to use automation to improve how you put your notes to work, track action items from meetings, and put an end to regular copy-paste actions. 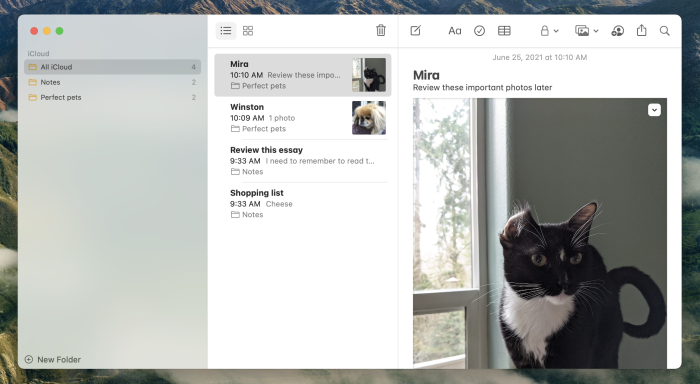 There's a saying in photography: the best camera is the one you have with you. If you have a Mac, you have Apple Notes, and that alone makes it the best note-taking app for many people. I don't say this to put Apple Notes down—it's a very effective tool. But the fact that you don't need to install it, pay for it, or create a new account to get started is, for most Mac users, more than enough of a reason to try Apple Notes first.

This app loads instantly, and creating a new note couldn't be faster. You can drag images to your notes, and they will show up instantly, and there's also support for embedding audio files. You can also attach any document to a note, if you want, and it all happens very quickly. This is a native Mac app, after all, so you don't have to wait for an upload before things show up.

Notes are organized into notebooks and arranged by date. There's no tagging and no universal search, which means this isn't going to become a database of your life anytime soon. But it's great for keeping track of what you're working on right now, and for quickly writing something down. If you're looking for a notes app, try Apple Notes first. It might fit you perfectly, or you might learn which missing features matter most. Either way, it's a win. 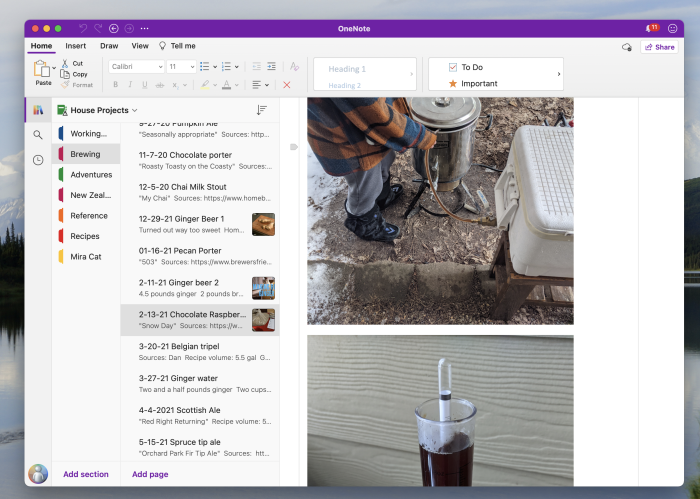 OneNote first came out in 2003, making it by far the oldest app on this list. Notes are organized in multiple notebooks, which are divided into sections. This is a structure many other apps would go on to copy, but in many ways OneNote still does it best—all while offering a significantly more generous free option than you can find anywhere else.

OneNote is particularly easy to recommend to Microsoft Office users, who will immediately find the user interface familiar, but it works for everyone. The core metaphor is that of a paper notebook, and it shows. Most apps in this list work like a text editor, but OneNote is more like a piece of paper: you can click anywhere to start typing in that exact spot. There's also support for drawing, though this is probably easier to use on a tablet than a Mac, and images and documents can be added inline or as attachments.

And the search is very complete, giving you a way to find notes across every one of your notebooks. There's even optical character recognition (OCR), meaning if you attach an image or PDF, your search applies to the contents of those files. No other app on this list offers that. You can also clip articles and recipes from the web using the OneNote clipper for your browser.

OneNote syncs to every kind of device you can imagine, well outside the ecosystem. So if you ever use Windows or Android, it's a great choice. You can make OneNote even more powerful using Zapier's OneNote integration, which connects OneNote with thousands of other apps. For example, you could automatically make new notes for all Google Calendar appointments so you're ready to go when the meeting starts, or you could automatically migrate notes from other apps.

Try out OneNote if Apple Notes doesn't give you quite as much freedom as you'd like. You might find the interface a little cluttered, but the flexibility is well worth the tradeoff.

OneNote's closest rival was, for a long time, Evernote. A recent update means the Mac app is essentially the web version of Evernote in a window. That's why we're not including Evernote in this specific list, even if we still think it's one of the best overall note-taking apps. 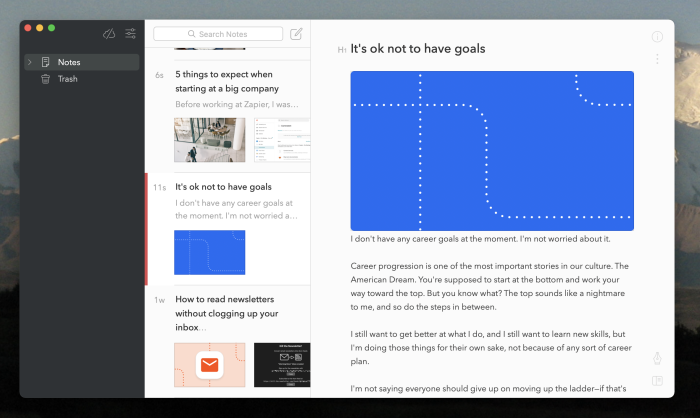 I'm just going to come out and say it: Bear is really pretty. It's clearly designed with aesthetics in mind, and it's going to appeal to a lot of Mac users for this reason exactly. It's also really fast, as a fully native app.

What's here that isn't in Apple Notes? Well, you can use the Bear browser extensions to clip entire articles you find on the web. There's optional support for writing in Markdown, if you're into that sort of thing. There's also support for exporting your notes to other formats, including PDF, HTML, DOCX, and even JPG files.

Organization is a bit different too: it's done through hashtags, which can be added to the note itself, just like on Twitter. Hashtags show up in the left panel and can be arranged alphabetically, by last-used hashtag, or by popularity. Child tags can be created with a slash. For example, you could create a main #personal hashtag, and then use child tags like #personal/receipts and #personal/vacation for deeper organization.

It takes some getting used to, but it's comfortable once you do. If you like Apple Notes but wish it had just a few more features, Bear is what you want to check out first.

The most powerful Mac note-taking app 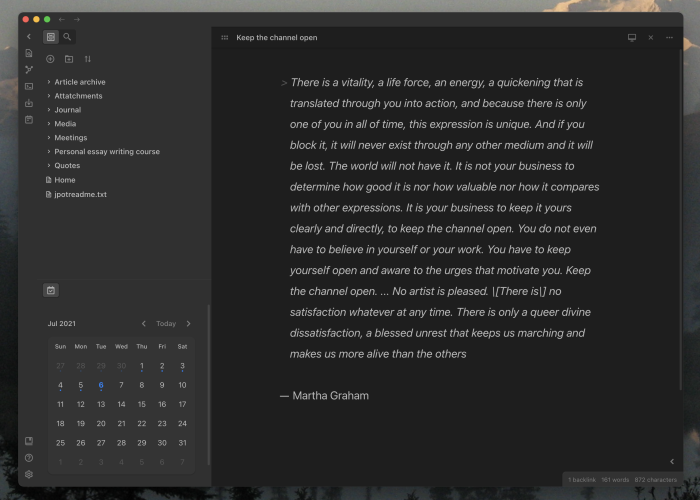 Obsidian is the first app I've come across that quotes John Locke in its help document. That alone speaks to how ambitious this app is: it wants to change the way you think. I've got to say: it's my kind of crazy.

Obsidian's notes are literally just text documents, formatted using Markdown. This means if you stop using Obsidian, you can keep all of your notes. But don't let the simplicity of the file format fool you—Obsidian aims to be a database of your life.

The app offers all kinds of structure, giving you a sidebar full of folders you can use to organize in but also emphasizing internal hyperlinks. A core idea here is that you will create new notes frequently, then link back to them in other documents. This creates a web of knowledge you can easily browse, and there's also a quick keyboard shortcut for pulling up notes by name or contents. It's almost like a personal wiki, but better.

This sounds strange, but start using it, and the concept makes a lot of sense, quickly. You can make it work exactly the way you want to. Everything about the interface is customizable, and you can have multiple notes open in the same window. But the real power comes from the community plugins, which let you add features like a calendar for daily journal entries or a full-blown kanban board.

Obsidian pricing: Free for most features; from $25 for exclusive features. There are also add-ons for things like end-to-end encryption and version history ($8) or the ability to publish notes and access to graph views and outlines ($16). 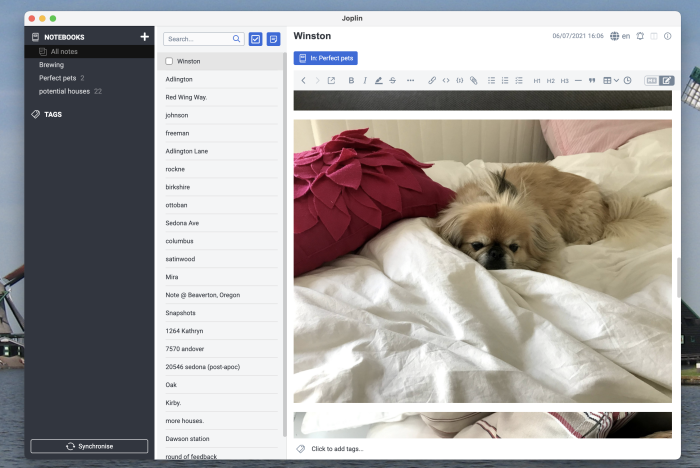 Notes are intensely personal, and I understand if you don't want to trust them all to a company that has its own agenda. Joplin is a free and open-source application, which among other things means that all of your notes live on your computer under your control. You don't need an account to get started, and you can sync your notes between devices using any service you want: Dropbox, OneDrive, or the open-source Nextcloud are all supported, and you can enable end-to-end encryption if you don't want third-party services to have access.

The interface is that of a traditional note-taking app, with notebooks and notes organized in the left column. You can also organize notes using tags, and you can clip articles from the web using the web clipper. The main editor is in Markdown, but there's an optional rich text editor if you're not comfortable with that. There's also support for opening notes in external apps, so if you've got a favorite Markdown editor, you can use that instead.

It's the most robust open-source option we found, and there's support for importing notebooks from Evernote. I recommend it if you want full control over your notes.

This article was originally published in March 2019 by Tim Brookes.