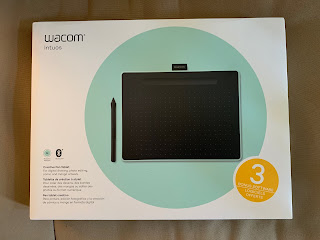 I was recently sent a Wacom Intuos Creative Pen Tablet to review and I’m not being paid for this review. I’ve heard about these but I’ve never used one. When I was asked to try it, I was so excited because I wanted to know if it was worth teachers or schools buying one or not. I was sent the Wacom Intuos 6100 with Bluetooth.

One thing I noticed was that there weren't a lot of instructions on how to begin. So I used the directions that were sent to me which were mainly pictures. I attached the tablet to my laptop (MacBook Pro) with the USB cable that came with it. Then I went to the website that was given in order to download the software and drivers needed. Along with the tablet, 3 bonus software packages were included. I was able to download 2 of them but I needed to update my laptop software in order to open the third one. I also watched the tutorials that were given.

I wasn’t exactly sure how to use the pen and tablet without any directions so I opened up the Clip Studio Paint program on my laptop. I opened up a new blank page and used the pen on the tablet, I was surprised to see the writing on the blank page on my laptop. When I hovered the pen on the tablet, I could see the cursor on the screen. I clicked on the calligraphy button on the left and made sure the “ink” was black. Then I started writing and like magic, my writing was there. It was so much fun experimenting on this page with different fonts and styles.

Then I opened up the Clip Studio AfterShot program and played with it also. I was able to adjust and enhance pictures more easily. There were a lot of features that I will need to play with when using the program to understand what they do but using the digital pen was very easy.

I also opened up a Microsoft Word document and was able to handwrite my notes onto the screen. It is so much easier to draw diagrams and examples to show students. It is also easier to write math equations just as if you were writing on a piece of paper.
I tried using it connected to my laptop as well as using Bluetooth and both worked very well. I like the freedom that Bluetooth gives me if I need to walk around a classroom.

I know why there weren’t a lot of instructions because it is pretty intuitive on how to use the pen. The pen works better than using a mouse or a trackpad! It does take some practice with using the pen and writing legibly but it was a lot of fun. With more practice, I think I will feel more comfortable using it.

I’ve talked with other teachers who say they have used this in their classrooms. Many have old Promethean Boards that no longer get tech support but teachers are able to use their Wacom when teaching the class and using the Promethean Board.

I think this will be a handy tool to have in the classroom as well as a tool to use for personal reasons. I would definitely recommend someone getting this if they feel they don’t have the flexibility with their computers that they would like to have. If they need to draw pictures or diagrams, this would be extremely useful for a teacher. If students are using drawing or editing photos, this would be much easier to use than a mouse or trackpad.

Do you have a Wacom tablet? If so, what do you use it for? Please share.