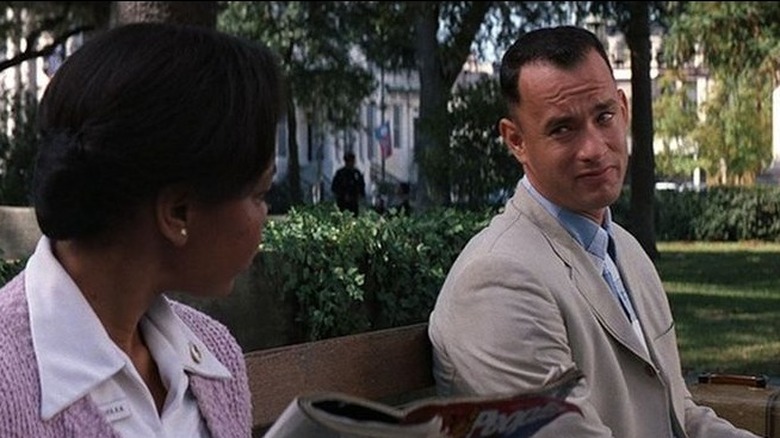 Relentlessly quotable and overwhelmingly heartwarming, "Forrest Gump" is the kind of film you put on for nostalgia's sake. But the reason it remains so watchable is its life-affirming story, which follows a relentlessly optimistic young man played by Tom Hanks. It's Gump's buoyant good nature that helps him both endure heartbreak and loss but also thrive as a compassionate human being. The opening scene of "Forrest Gump" perfectly clues in the audience to the kind of person Gump is, as he strikes up an earnest and sincere conversation with a stranger waiting at the bus stop beside him. He goes on to tell his full life story, which on paper probably sounded narcissistic. Yet there is no pretension or ulterior motive to Gump regaling strangers with his story. He's not even bothered by the fact that his audience keeps changing as people leave to catch their rides.

It turns out that, of all people, Hanks didn't initially see the value in the bench scenes, which are spaced sproadically throughout the film. Hanks' doubt feels blasphemous considering one of the film's most famous quotes, "life is like a box of chocolates," comes in those opening minutes. This is just one of many little aphorisms that come during the bench scenes, which reveal Gump's whimsical and hopeful approach to life. So what exactly were Hanks' doubts about these poigant moments? 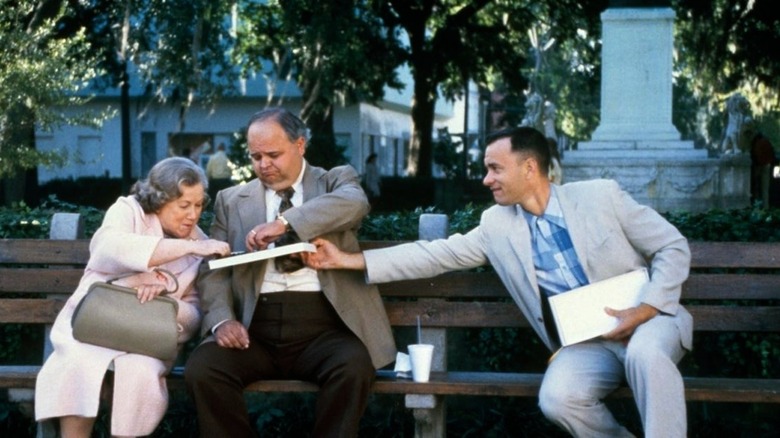 Despite bookending the various episodes we see of Gump's life, the importance of the bench scenes was lost on Hanks. The actor revealed on the ReelBlend Podcast that he actually asked director Robert Zemeckis if anyone in the audience would even understand or care about his character's ramblings to complete strangers (via CNN). "I said to Bob [Zemeckis], 'Is anyone going to care about this nut sitting on a [bench]? What is this? No one knows what's in this thing I mean.'"

At that point, Hanks had been under the impression that the scenes shot in Savannah, Georgia were just "fodder for a possible narrative piece." This might explain why the actor didn't see anything crucial in them. It probably didn't help that they also had to shoot thirteen pages of dialogue in a day and a half. Hanks told the New York Times that Zemeckis' answer to his question is something he'll always remember. "Bob said: 'It's a minefield, Tom. You never know what's good. Are you going to make it through safe? Or are you gonna step on a Bouncing Betty that's going to blow your balls off?'"

In other words, who knows what's going to stick and what audiences will hate? After all, the whole reason Gump is there on that bench is to set up the film's final act: reuniting with Jenny and meeting his son. While all his other bench interactions are perhaps frivolous to the plot, they are exceptionally important in fleshing out Gump's personality. Zemeckis' words ring true decades later given just how iconic those shots of Hanks' character sitting on the bench are today. People even flock every year to the humid South in search of the spot where those scenes were filmed. 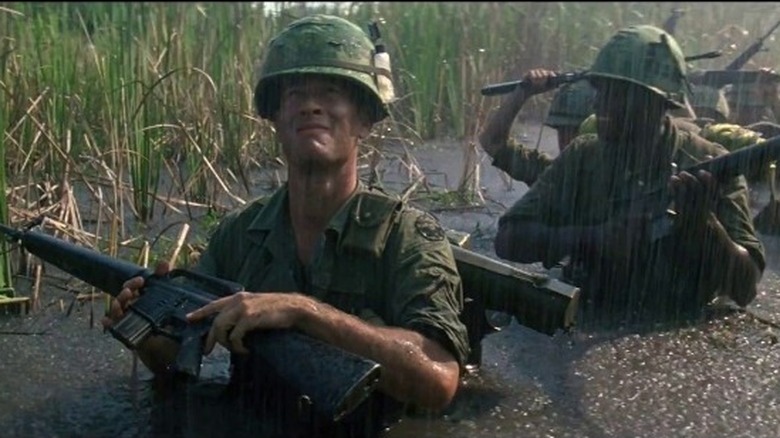 The bench scenes weren't the only moments in "Forrest Gump" that star Tom Hanks had trouble believing. In that same interview with the New York Times, the actor also confessed that he suggested changes to his character's behavior and reactions during the Vietnam scenes. "There's the scene with the ambush in Vietnam," he recalled, "and Bob Zemeckis originally wanted Forrest to be confused and run away. I said, 'Bob, why am I playing a soldier who is really good at his basic training without then showing me slapping in my clip and firing a set of rounds?'"

Perhaps you could chalk it up to panic or the colossal differences between basic training and real combat, but seeing Gump cower in fear would feel counter to everything we'd learned about him to that point. As Hanks said, what's the point of seeing Gump stun his drill sergeant with his seemingly innate talents if we don't see him doing the same when it actually matters? Running away is not something Gump does, at least not yet -- the character does eventually trek across the country after the death of his mom. But Gump is a man who rarely veers away from adversity and pain; he strides headlong, not stubbornly or arrogantly, but steadfastly and coolly.

Hanks might've just had a lack of confidence in the bench scenes, but the concerns he raises about the Vietnam scenes are valid. Personally, I'm just glad Zemeckis made certain other cuts to the film, and that the unmade "Forrest Gump 2" idea never got off the ground.