Hello, crafting friends!
Yesterday evening my sister took me out to dinner and I wanted to bring along a little thank you. I found quite a big off-cut of SU designer paper, which must have been around for quite some time, so I used it to make a little treat bag to fit a mascara I knew she had been wanting to try. There was just enough of the paper to get a thank you card out of it too. 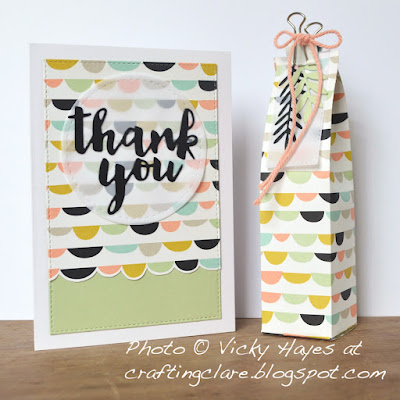 Here's the bag and the card together. It was so quick to make them using just die cuts and no stamping. 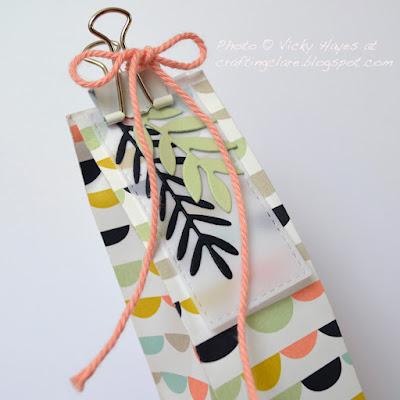 THE BAG
I used my Simply Scored to create a simple bag shape. (For those that are interested, the paper was trimmed to 6.5" square, then vertical scores made at 1.5, 3, 4.5 and 6". The paper was turned 45 degrees clockwise and scored at 1.5".) I assembled the bag using strong red tape, popped the mascara inside and secured the top with a tiny enamel bulldog clip tied up with coordinating twine. I made a label from a scrap of vellum, cut with a stitched rectangle die by Heffy Doodle, and decorated with some leaves that were in my snippets box. 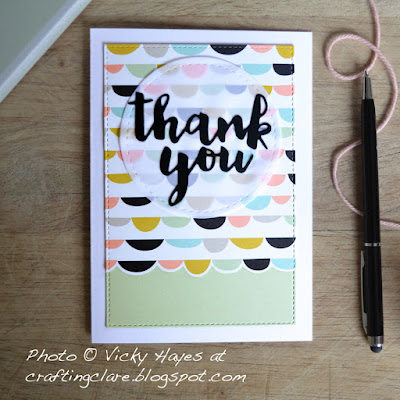 THE CARD
It was a tight squeeze, but I was able to trim the left-over bit of paper with another of the stitched rectangle dies. The same die was used to cut out a piece of green card from my snippets folder. I fussy cut the bottom of the designer paper along the scallop design, layered it over the green card and attached it to a card front. This was topped with a scrap of vellum cut with a stitched circle die by Waffleflower, and a sentiment die cut from a black snippet. Simple!

CHALLENGES
I'm linking these projects up at The Snippets Playground where Miss Di and Head Prefect Sarn are preparing for Jubilee celebrations; The Sisterhood of Crafters want to see Bag projects so I'm joining in there too. I'm sharing the card at Happy Little Stampers Die Challenge where Anything Goes, and at Addicted to Stamps and More where the theme is Die Cuts and/or Stencils. 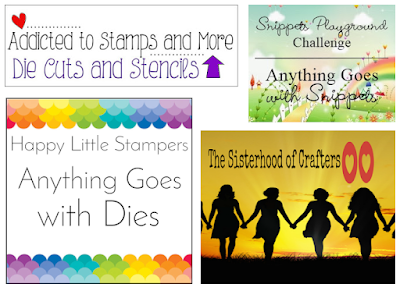 AND IN OTHER NEWS

My sister and I dined at a posh restaurant where there was a 9 course 'tasting menu', and a waiter whose accent became more and more French as the evening wore on. There was even an 'amuse bouche' which made us go a bit giddy! 'Well, that certainly amused MY bouche!' we declared at regular intervals and giggled like silly school girls. 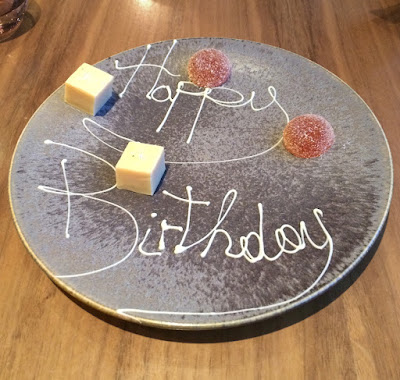 My sister had told the staff beforehand that it was my birthday and, at the end of the meal, this plate was brought out! Those little sweetmeats are handmade white chocolate fudge and passion fruit jellies - and oh my goodness they were delicious!
It was a lovely evening but I can tell you that staggering about in high heels used muscles that I had obviously forgotten I had!!