Photography and video encourages your child to see the world differently while allowing him or her to create a kind of visual diary along the way. Without getting too poetic about it, photos are reminders of where weve been, people weve met, and stuff weve done. It makes experiences more visceral because you can relive them over and over again.

There are also innumerable secondary benefits to getting him or her behind the lens. The excitement of exploration, artistic creation, and to pre-visualize an image of video in his or her minds eye are just a few of the myriad benefits that will benefit your child later in life. But to survive the rough-and-tumble demands of the average child, a camera has to survive the journey.

Before buying your child a camera, keep a few things in mind, per digital media and photo expert Chris Phoenix, founder of the Phoenix Media Group.

Look for ergonomically considered-designs with buttons that are easy to reach and press, says Phoenix. Make sure you teach young kids the proper way to hold a camera, and to instill enough discipline in them to hold the shot an extra moment to prevent making the image blurry, allowing the shutter to complete firing.

Some stuff to think about: Megapixels? Frame rate? Durability? Because lets face it: Little hands drop things all the time, so a camera needs to be tough and hardy. We break each units benefits and weaknesses down so that you, the patron of the arts, can get your kid creating in the snap of a flash. And as an added bonus, you get to actually hold on to your phone. 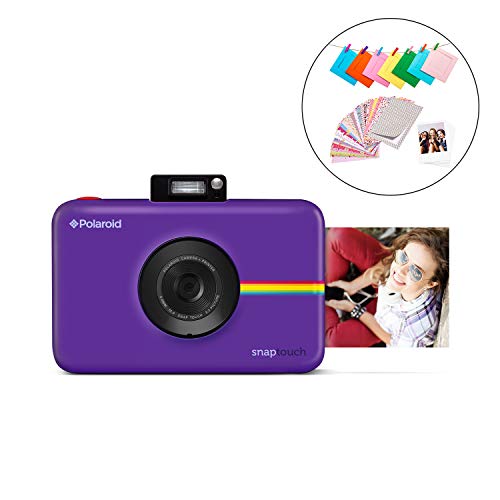 Pros: This easy to use instant camera has a touchscreen display, and a 3.4mm lens. Kids simply press the shutter button to capture the image, then print the photo on the spot. You usezinc Zero Ink printing technology, which eliminates the need for ink and toners.

Cons: Its on the pricier side. 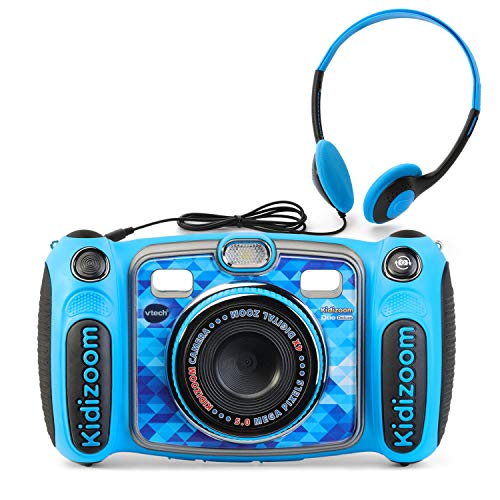 This 5 mega pixel camera has a dedicated switching button that makes it great for selfies.

Pros: Not only can kids up their selfie game, they can play music thanks to thebuilt-in MP3 player, built-in speaker and the included headphones. And parents can set limits on playing games, or disable access entirely.The camera has a 256 MB built-in memory.

Cons: The picture quality is not exactly that of a Leica. 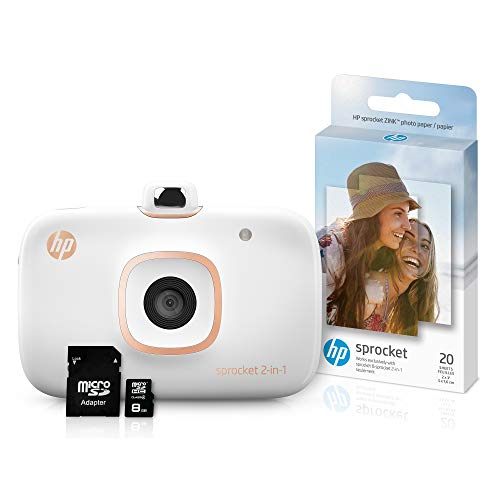 This portable camera is tiny but powerful.

Pros:About the size of a smartphone, this lightweight, portable camera and printer set goes right into your pocket. Its literally point, shoot, and print.

Cons: The photo quality is questionable, so this is great for younger kids who arent too choosy. 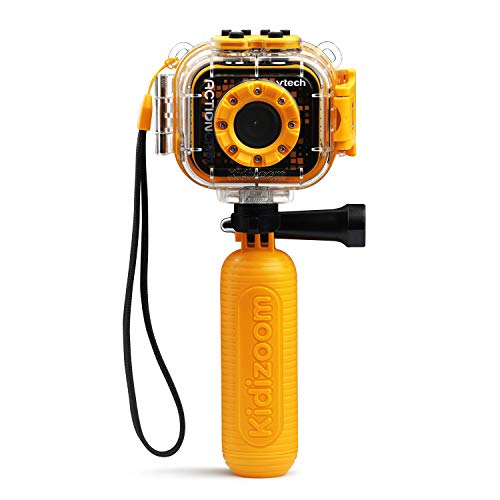 Think GoPro for kids: This is the HD camera for your adventurous kid, because you can mount it on bike or a helmet, and it has a wide-angle lens and waterproof case.

Pros: This is a durable, sturdy, and fun HD video and still camera for kids, with the bells and whistles theyve come to expect from mom and dads phone. It hastime lapse, stop motion, burst mode, fast- and slow-motion and frames, and a rechargeable battery that lasts 2.5 hours. 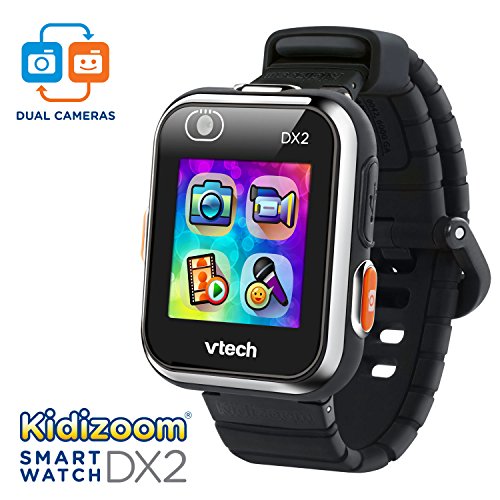 A camera on your kid's wrist? Hell yes. This watch has two cameras that allow kids to take videos, pictures and selfies. Plus, the camera watch has a customizable face, and is sweat-proof.

Pros: Think of this as a starter camera slash watch for your kids. It teaches them to tell time. It has games. And it has two cameras that let them take pictures, videos, and plenty of selfies. It has a pedometer, to encourage your kid to be active. The Kidizoom Smartwatch is deal for kids ages four to 12.

Cons: Its not waterproof, which is a huge bummer. 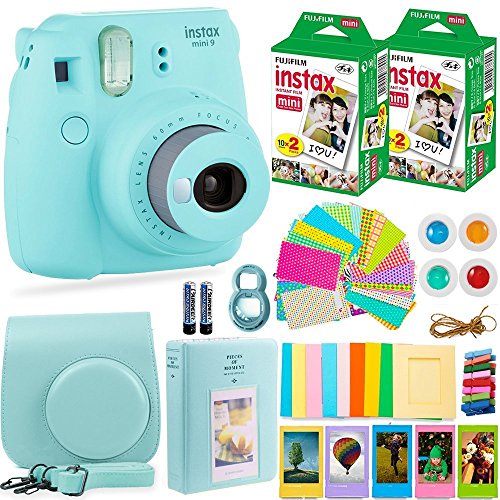 We here at Fatherly are unabashedly pro instant film, as theres just nothing in this digital age quite like holding a tactile print. While we love the spaces biggest name (rhymes with Smolaroid), for kids, we prefer Fujifilms Instax Mini 9 for a few reasons: affordability and a bunch of fun colors.

Pros:There is magic in watching your childs face as his or her picture appears moments after taking it. Fujifilms pack film is the most affordable in the space (search Amazon and you can find it for around 50 cents a piece). We also love that this camera comes in five fun colors, allowing your son or daughter to pick a favorite. Regarding function, a selfie mirror, close-up attachment, and flash all allow for a great latitude with his or her shots, all in an easy point-and-shoot setup.

Cons:While this camera is simple enough for kids to use, its not especially rugged. For that reason, we recommend it for older and more responsible children. Also, while the film is affordable, it will still be a cost over time, which should make any parent pause. 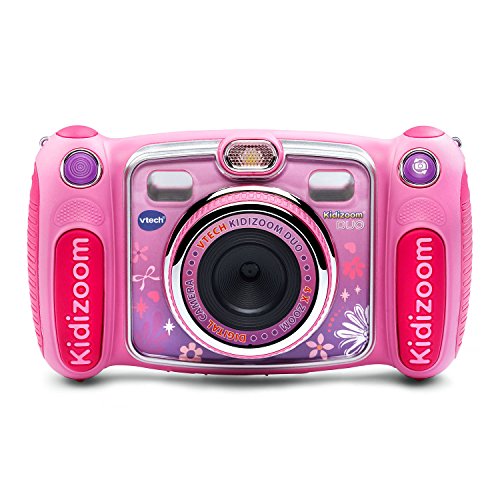 For the budding fashionista, a camera should be able to capture as decent a selfie as your smartphone. The VTech Kidizoom camera is built for this function, making it ideal for the child whose emphasis is on recording his or her interaction with the environment.

Pros:While the 2.4-inch rear LCD screen shows your son or daughter exactly what he or she is capturing with stills and video, its the rear-facing selfie camera, which shows a live view in that same LCD, that really impressed us. We also thought the dual viewfinders, which provided equal comfort for right- and left-eye-dominant kids, was an ingenious addition. A 256-megabyte memory is built in, but parents can upgrade it to outlast summer camp though separately purchased MicroSD cards. It also includes a few games for when kids need entertainment en route to the next location.

Cons:Like your own smartphone, theres a severe drop-off in image quality when using the kid-facing camera as opposed to its primarily lens (640 by 480, compared to 1600 by 1200). Still, this ingenious feature is worthwhile, if for no other reason than you can now keep your smartphone to yourself. Also, as it runs on four AAs, some complained of the weekly ritual of replacing the batteries. 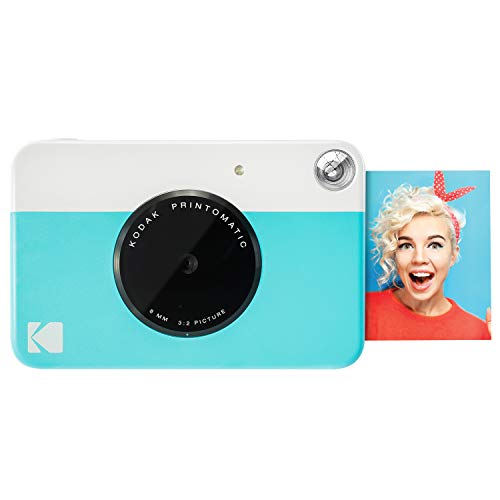 This camera is built to offer the best of all worlds: the novelty of an instant camera and the flexibility of a digital one. Instead of instant film, it captures photos on a microSD card and prints them on Kodak's inkless Zink photo paper.

Pros: These cameras look great not too sleek or faux-retro. They get 40 prints per charge of a rechargeable battery, can capture color and black and white images, and produce smudge-, water-, and tear-proof pictures.

Cons: While its very simple to operate charge, load, point, and shoot the Printomatic doesnt offer a ton of tweaks for budding photogs. Its best for younger kids and true beginners; those with some picture-taking experience probably will find it too simplistic. 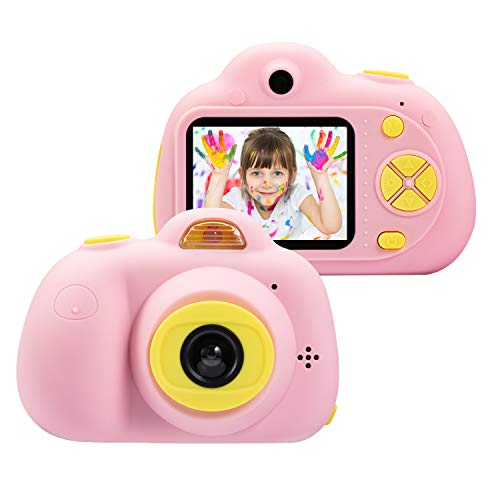 In the most basic terms, a bigger image is a better, higher-quality image. The omzer kids camera, while enjoying a rugged build, takes images of a quality similar to that of most modern cameraphones. As such, youll have the greatest latitude with the images later.

Pros:We had to double-checkyes, this supposed childs toy takes eight-megapixel images, a size which smartphones only surpassed in the past few years. It also captures 1080p high-definition video, while including a four-times digital zoom for ultimate framing control. But the biggest consideration is that it protects these quality components inside a silicon-covered shell for super impact absorption and security of grip. Finally, its included, rechargeable lithium-ion battery is so much better than running through disposables.

Cons:Photo purists may criticize the fact that it doesnt have a traditional viewfinder, instead only including the LCD screen on the back. But in our opinion, this is the direction all cameras, including those of the pros, are headed. You might as well jump onboard now, as thats most of what your child will find should he or she stick with it. 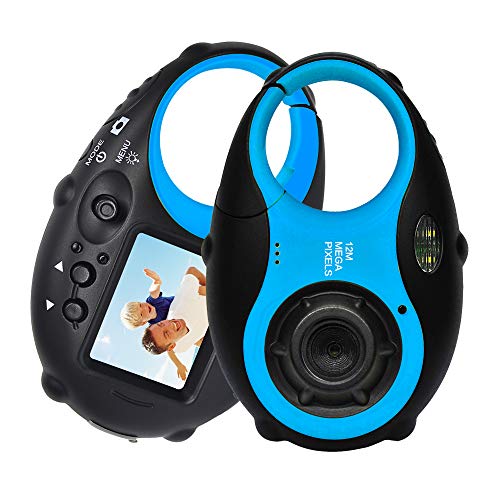 The old adage about losing your head if it werent attached to your body should give any parent pause when purchasing electronics for his child. Cocac solved this problem with its kids camera, allowing you to literally clip it to your kiddo, making it great for adventurous youths who need their hands free to get to the best vistas and highest reaches.

Pros:A 12-megapixel image is nothing to scoff at, and it leads our list as far as overall size. The same goes for its 1080p video, which is tied for the highest resolution of our options. These alone are worth inclusion, but its carabineer-like design, which clips easily to a belt loop or backpack, is what demands its inclusion. We love this option so that is doesnt get lost. When needed, its within arms reach.

Cons:It makes us a little sad that despite its amazing image- and video-capture ability, this camera doesnt look or feel like a camera. But dont let our nostalgia for bygone days diminish this device; it should be option one for adventurousand forgetfulkids. 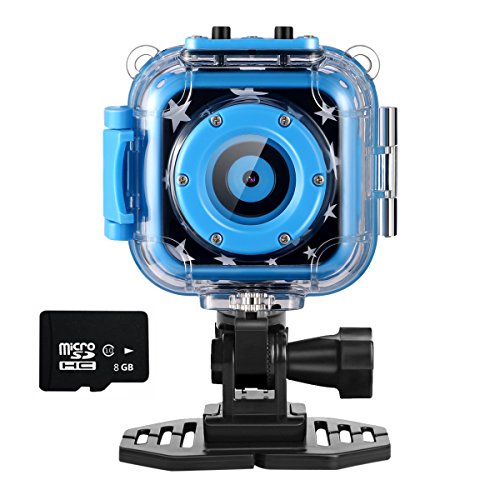 GoPro cameras are great, but for your kid, theyre also incredibly expensive. The Ourlife kids waterproof camera is an action camera that wont break the bank if, somehow, it gets broken. For the budding daredevil who wants to record some sick footy, this is your choice.

Pros:Its helmet- or bike-mounted design allows for some crazy point-of-view angles at the skatepark, which is captured at crystal clear 720p at 30 frames per second (fps). It also works as a standalone camera, snapping five-megapixel stills. While we raved about another waterproof camera above, the Ourlife goes even deeper to a max depth of 30 feet.

Cons:One of the reasons why GoPro footage looks so great is because of its vibration reduction. This unit certainly could have benefitted from some. Still, as an affordable alternative, you can overlook a little image shakiness.

Every product on Fatherly is independently selected by our editors, writers, and experts. If you click a link on our site and buy something, we may earn an affiliate commission.

The post The Best Kids Cameras Turn Your Offspring Into the Next Ansel Adams Or Annie Leibowitz appeared first on Fatherly.