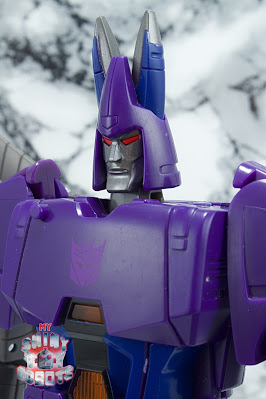 Even as the Transformers toyline transitions from the War for Cybertron trilogy into the new Legacy line, the Generations Selects range still continues on strong. This unique little line has presented collectors with some of the more interesting corners from the franchise, ranging from obscurer characters to nostalgic repaints. Last year saw the release of Kingdom leader class Galvatron in his original G1 toy colours, and where the new Decepticon leader goes his loyal second in command isn't too far behind! Transformers Generations Selects Cyclonus & Nightstick pays homage to Cyclonus original 1986 toy, combining him with his Targetmaster partner to create a truly special release. 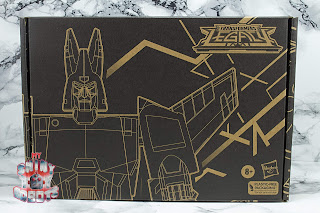 As with previous Generations Selects figures Cyclonus shows off Hasbro's push toward plastic free packaging, coming in thick cardboard packaging with a fold out top. Said lid has been done in black with a stencil image of Cyclonus, much in the style as other releases from this range. In addition to that it also features the Transformers Legacy logo, which looks just as bold in monochrome colours as it does on the loud and colourful mainline Legacy packaging. The rest of the box is fairly plain in comparison, with sides sporting a few Decepticon insignia and the Legacy logo for additional decoration. All the product information is written on one side as well as the sticker sealing the box, which needs to be cut open in to lift open the lid. Inside you'll find Cyclonus, Nightstick and the other accessories neatly resting on a plain cardboard tray (tied down with paper ties), and all the paperwork stored underneath.

As with Generations Selects Galvatron an optional sticker sheet is also included if you'd like to go for a more complete G1 toy look, with the placement of each sticker documented in the transformation pamphlet. The stickers have a high-quality foil finish and overall are an excellent translation from the original toy. Judging by promotional pictures of the figure it looks much better with stickers applied than Galvatron did, but even so I've opted not to add them to my figure as I think it still looks better without. Regardless of how careful you are stickers will eventually degrade over time, and the bold colours alone are more than enough to convey how different this is from the original Kingdom version. 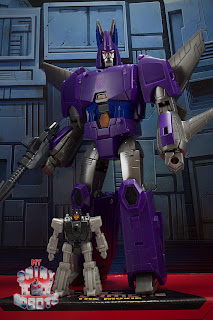 Generations Selects Cyclonus is a straight redeco of the War for Cybertron: Kingdom voyager class figure, swapping out the Kingdom version's cartoon accurate deco for one more directly inspired by the original G1 toy from 1986. This primarily involves swapping out the lilac for a dark shade of purple and the silver sections for a metallic gunmetal grey colouring, but also swapping some of that colour placement around and adding some metallic blue around the waist section. It's a darker and arguably far more striking deco than the original, with the gunmetal grey really bringing out the detailing in that face sculpt. Being surrounded by much darker colouring, it also makes the super light-piping on the eyes all the more effective. There's still plenty to love about the Kingdom version, but the difference between the two releases just goes to show why getting toy-accurate decos is a big deal for collectors. For some people this is their nostalgia lies in the toys rather than the cartoon, so not only is it giving them representation but also showing off just how different those toys often looked. On a figure this good there's definitely room for both in a collection, especially when you could also pass one off as Cyclonus' Armada – the transformed Decepticon initially present when Unicron reformatted them but then never seen again. 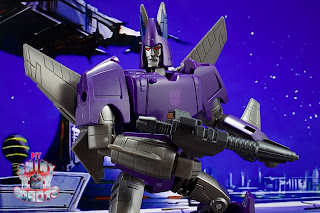 Naturally Cyclonus features exactly the same articulation as his Kingdom predecessor, which altogether includes;
- Ball jointed head
- Swivel hinge shoulders and hips
- Hinged neck and elbows
- Double hinged elbows and ankles
- Waist, bicep, hand and thigh swivels
If you have prior experience with the Kingdom version of this figure, you'll already know how much of a dream this figure is to pose. A couple of points on the body are technically there for the transformation rather than to directly contribute to body articulation, but nevertheless add to enhancing what on the surface looks like a rather blocky design. Points like the shoulders, knees and ankles are particularly well executed. That all said, it is worth noting that the tolerances on the Generations Selects version are noticeably lower than they were on the Kingdom version. It isn't so bad that the shoulders/arms aren't able to support his bulkier weapons or the legs instantly widen in any sort of action pose, but it’s most definitely looser than the previous version was. A little curious given the mould hasn't exactly had a lot of reuse to warrant the joints being weaker, but nevertheless it is something collectors can often expect when a mould is recoloured/reused. A slight knock against what's otherwise a brilliant figure, but certainly not enough to ruin the experience. 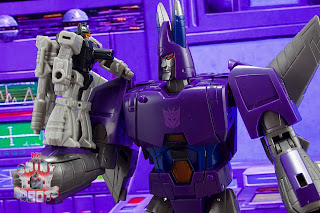 In addition to his Oxidating Laser (now done in a toy-accurate black as opposed to silver) which was included with the Kingdom release, Generations Selects Cyclonus also features a selection of additional accessories. The most significant of these is his Targetmaster partner Nightstick, a redeco of Siege Blowpipe. As such this version of Nightstick is rather different to previous iterations in weapon mode, but looks great when it comes to colouring. It's not quite a direct match of the G1 toy (the arms here are grey as opposed to black), but it's close enough. In robot mode Nightstick features ball jointed shoulders and hips, so has some limited articulation. The transformation to weapon mode is a nice straightforward process where everything clicks into place, creating a chunky blaster that Cyclonus can wield either instead of or in addition to his standard weapon. The inclusion of Nightstick was one of the best things about the Universe Cyclonus, and whilst the Kingdom version is undoubtedly the better mould getting the Targetmaster with this version definitely feels like it truly trying to surpass it. Admittedly the articulation isn't quite as good (Universe Nightstick had elbows as well) but on a figure this small it quite as significant a difference. 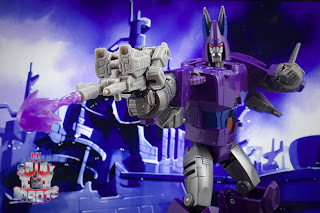 And on top of that, Cyclonus also comes with two purple blast effects that can connect to both Nightstick and his standard weapon. One effect is a thin beam which expands into a ball at the end, whereas the other features a (removable) burst piece where it fixes around the barrel. These parts were previously included with Siege Caliburst and Blowpipe respectively, albeit in different colours. As such they were not designed solely for Cyclonus and are compatible with any Transformers weapon with an identically sized barrel plug. Effect parts are becoming more and more common with special releases such as this, so it's wonderful to see Cyclonus come with them in addition to what's already a reasonably hefty extra accessory. Though relatively small, they instantly make posing and displays that much more dynamic. 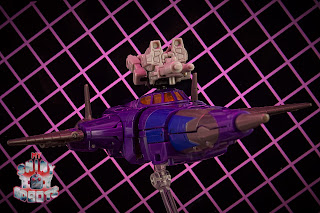 For those who've handled this mould before it's a return to that lovely 34-step transformation, and for those who are yet to experience it you're in for a real treat. No small parts to worry about breaking, just multiple steps of tucking things away and folding the robot up until you're left with his futuristic sci-fi jet alt mode. The penultimate steps where the nosecone extend out and the cockpit/wings swing around to clip onto the body remain a particular highlight. As was the case with the robot mode the new colour scheme emphasises certain areas in a way that the previous one did not, with metallic blue sections running along the side of the nosecone as well as those striking metallic grey wings and thrusters. Cyclonus' Oxidating Laser fits comfortably in the socket just above the canopy, but for that proper Targetmaster look you can also plug Nightstick there in exactly the same way. 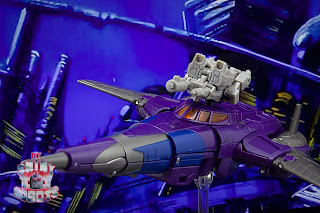 What's left to be said about this wonderful alt mode that hasn't already been said? It's the perfect likeness of how it appeared in the cartoon, and with these new colours manages to look all the more menacing. The metallic blue areas mesh with the darker purple beautifully, and compared to the brighter colours of the Kingdom toy make Cyclonus seem like that much more of a night stalker that'll swoop in a decimate his enemies completely unawares. The mould features retractable landing gear so that it can be properly laid on a flat surface, but also works well with articulated display stands for mid-flight posing. The stand port on the robot mode crotch piece is accessible with a small enough arm, but should you not have one to hand the ship balances comfortably if the stand's claw piece is widened and rested in the undercarriage/gap between the legs. 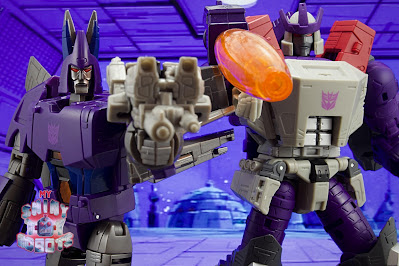 Kingdom Cyclonus is widely considered to be one of the best releases from that series and with Transformers Generations Selects Cyclonus & Nightstick it's only gotten better. Despite previously considering myself much more of an animation-accurate collector once again I've found myself wowed by the bolder colours the original toy had, which translate to the mould beautifully. While the looser joints are unfortunate, thankfully it isn't so bad that the figure can no longer comfortably hold a pose. And if the new deco wasn't enough to sway you, the inclusion of both Nightstick and some nifty blast effects really make this version stand out even if you do own the original release. It's the perfect companion piece to Galvatron, and once again Generations Selects proves to be an ideal place to release alternate decos without overwhelming the main line.